The last week of April was notable for team BLRT REPAIR YARDS in Klaipeda, as one of Royal Wagenborg`s cargo vessels EGBERT WAGENBORG – the vessel is named after the founder of Royal Wagenborg – Mr Egbert Wagenborg who founded the company in 1898- arrived for repairs.

The EGBERT WAGENBORG is a next-generation open-top ice-classed general cargo vessel and the 1st vessel in the Easy Max series in Royal Wagenborg`s fleet. The vessel is the leader in its segment in terms of sustainability and was honoured with the Maritime KVNR Shipping award in 2017 established by the Royal Association of Netherlands Shipowners (Koninklijke Vereniging van Nederlandse Reders (KVNR)) to honour an organisation or individual who, through innovation, contributed to the shipping industry in the Netherlands the most

This was EGBERT WAGENBORG`s 1st class renewal after the launch. Specialists from Western Shiprepair, one of BLRT Repair Yards, carried out repairs in accordance with classification society requirements and replaced previously installed BWTS with a more modern and powerful one. The modernization has made the ship even greener and more environmentally friendly.

‘The fact that customers wish to continue cooperation is a significant mark of appreciation for every employee who contributes to the repair of ships through their own efforts and hands, as this allows us to justify the acquired reputation of a reliable ship repair company,’ said Aldas Karinauskas, Regional Sales Manager at BLRT Repair Yards

For the record: In Mid- April Wagenborg Shipping placed an order for the construction of a sister ship of the Egbert Wagenborg and the Máxima. The third vessel of this EasyMax type is expected to be delivered in the first half of 2023 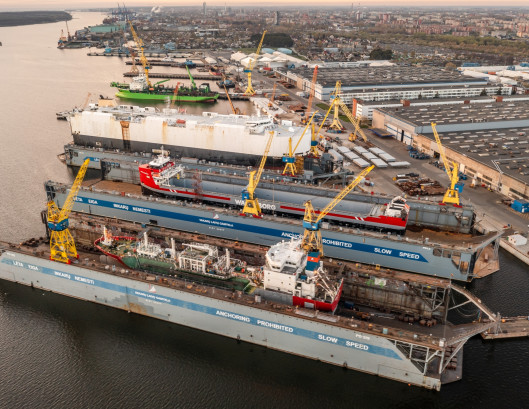