Among yards` customers and partners, there are many large international shipping companies with whom Tallinn Shipyard (TSY), one of BLRT REPAIR YARDS, members of BLRT Grupp has been cooperating for years. Among these valued partners is one of Europe’s leading shipping companies, Wilson Ship Management (WSM), with headquarters in Bergen, Norway.

According to Gabriel Avanesov, Sales Director of Tallinn Shipyard, a partnership between Wilson ASA and Tallinn Shipyard has been going on for more than 25 years. 2022 is no exception.

Since January, three ships of Wilson ASA have already visited the shipyard in Tallinn. In mid-January, Tallinn Shipyard welcomed M/V Wilson Brugge for maintenance. The yard`s specialists completed the work in the scope of a class renewal: treatment of the ship’s hull and cargo holds, repair of ME, propulsion complex and rudder, inspection and repair of hatch covers.

In accordance with the Ballast Water Management Convention adopted by International Maritime Organization, Tallinn Shipyard’s Conversion and Modernization team installed a bwts system onboard the Wilson Brugge produced by a company focusing on environmental protective solutions for the maritime industry- Norwegian Greentech AS

In April, a similar scope of works, including the installation of Norwegian Greentech`s ballast water treatment system, was carried out but already onboard the second Wilson ASA vessel visiting TSY this year- Wilson Rotterdam

In May, TSY completed the repair of the third WSM vessel this year, the general cargo vessel Wilson Brake. During vessel dock stay, as in the previous projects, the specialists of Tallinn Shipyard performed hull and cargo holds cleaning, executed an overhaul of the ME and auxiliary mechanisms. Among other jobs, a fairly large amount of work was carried out to replace the ship’s hull structures. Norwegian Greentech`s ballast water treatment system with a capacity of 370 m3/h was also installed.

At BLRT Repair Yards we value maintaining relationships with our long-term partners, which also includes Wilson Ship Management. Over the years of cooperation, to be precise, since the early 90s of the last century, the number of WSM ships repaired by yards specialists has long exceeded 100. 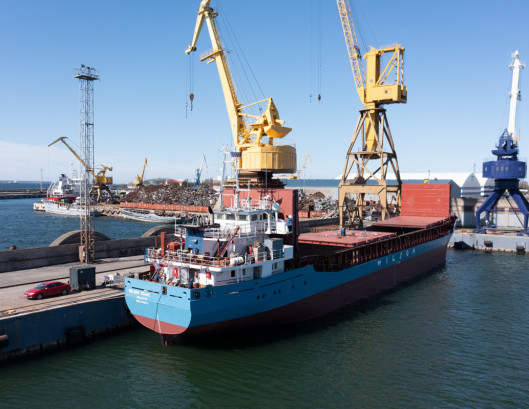